Nutanix Cloud Clusters (NC2) on Azure provides on-demand clusters running in target cloud environments using bare metal resources. This allows for true on-demand capacity with the simplicity of the Nutanix platform you know. Once provisioned the cluster appears like any traditional AHV cluster, just running in a cloud provider’s datacenter(s).

The following key items are used throughout this section and defined in the following:

The provisioning process can be summarized with the following high-level steps:

The following shows a high-level overview of the NC2 on Azure interaction: 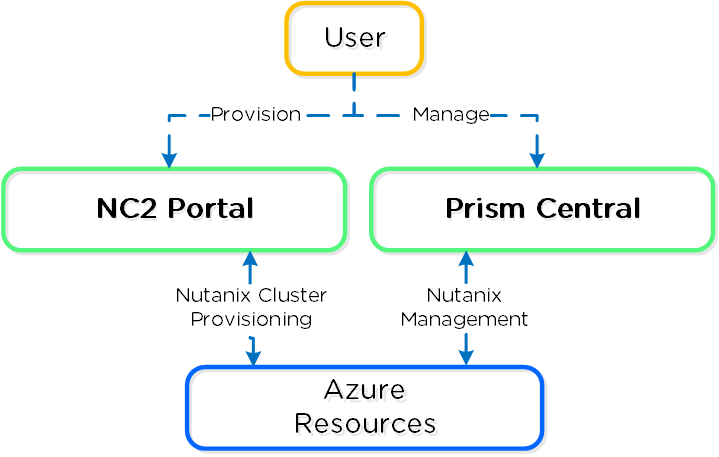 The following shows a high-level overview of a the inputs taken by the NC2 Portal and some created resources:

Given the hosts are bare metal, we have full control over storage and network resources similar to a typical on-premises deployment. We are consuming Ready Nodes as our building blocks. Unlike AWS, Azure-based nodes are not consuming any additional services for the CVM or AHV.

Nutanix Clusters on Azure uses a partition placement policy with 7 partitions by default. Hosts are striped across these partitions which correspond with racks in Nutanix. This ensures you can have 1-2 full “rack” failures and still maintain availability.

The following shows a high-level overview of the partition placement strategy and host striping:

Core storage is the exact same as you’d expect on any Nutanix cluster, passing the “local” storage devices to the CVM to be leveraged by Stargate.

Given that the "local" storage is backed by the local flash, it is fully resilient in the event of a power outage.

NC2 utilizes Flow Virtual Networking in Azure to create an overlay network to ease administration for Nutanix administrators and reduce networking constraints across Cloud vendors. Flow Virtual Networking is used to abstract the Azure native network by creating overlay virtual networks. On the one hand this abstracts the underlying network in Azure, while at the same time, it allows the network substrate (and its associated features and functionalities) to be consistent with the customer’s on-premises Nutanix deployments. You will be able to create new virtual networks (called Virtual Private Clouds or VPCs) within Nutanix, subnets in any address range, including those from the RFC1918 (private) address space and define DHCP, NAT, routing, and security policy right from the familiar Prism Central interface.

Flow Virtual Networking can mask or reduce Cloud constraints by providing an abstraction layer. As an example, Azure only allows for one delegated subnet per VNet. Subnet delegation enables you to designate a specific subnet for an Azure PaaS service of your choice that needs to be injected into your virtual network. NC2 needs a management subnet delegated to the Microsoft.BareMetal/AzureHostedService. Once your subnet is delegated to the BareMetal service the Clusters Portal will be able to use that subnet to deploy your Nutanix Cluster. The AzureHostedService is what the Clusters portal uses to deploy and configure networking on the bare-metal nodes.

Every subnet used for user native VM networking also needs to be delegated to the same service. Since a VNet can only have one delegated subnet, networking configuration would get out of hand with needing to peer VNets among each other to allow communication. With Flow Virtual Networking we can drastically reduce the amount of VNets needed to allow communication of the workloads running on Clusters and Azure. Flow Virtual Networking will allow you to create over 500 subnets while only consuming 1 Azure VNet. 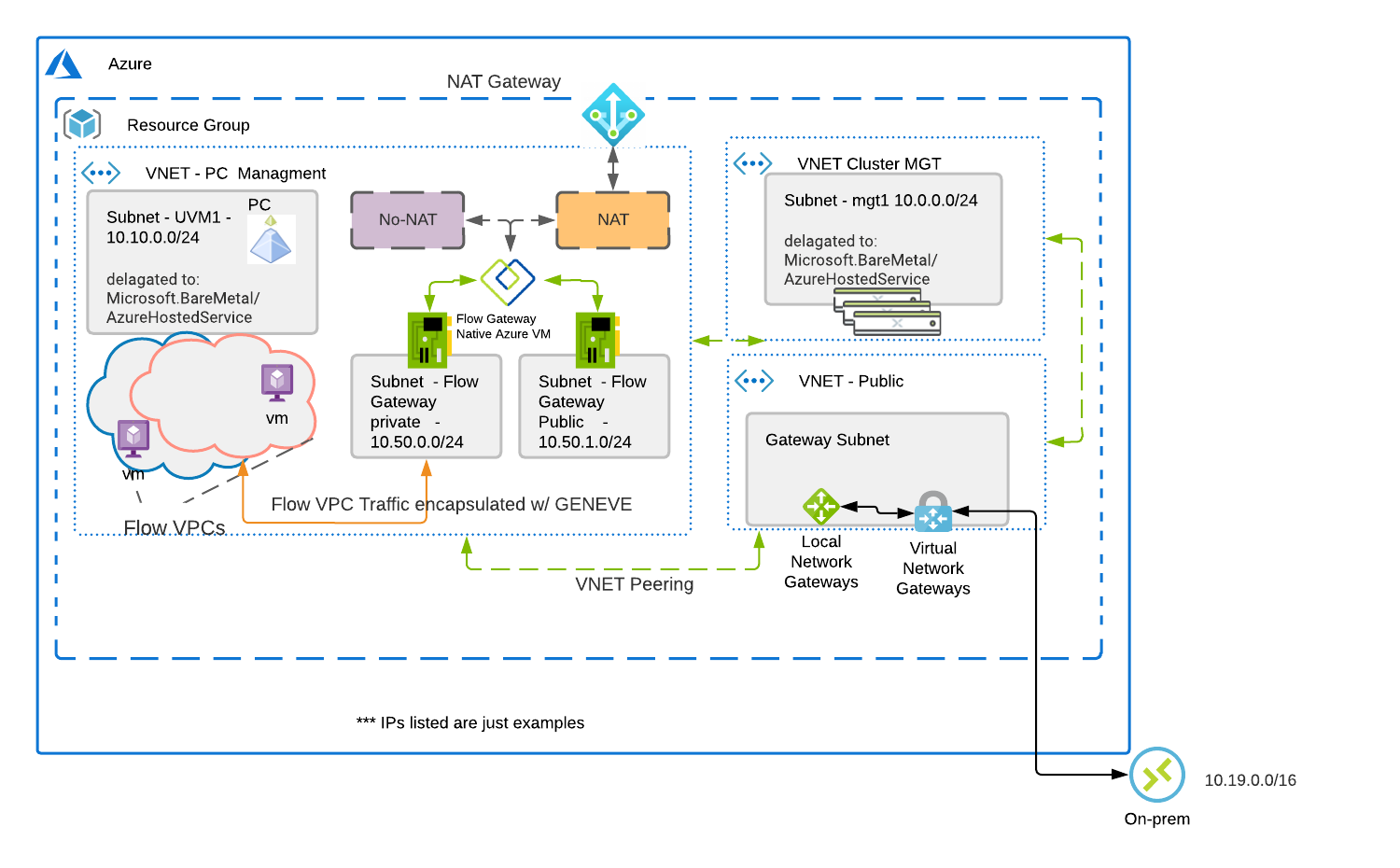 It is recommended to create a new VPC with associated subnets, NAT/Internet Gateways, etc. that fits into your corporate IP scheme. This is important if you ever plan to extend networks between VPCs (VPC peering), or to your existing WAN. I treat this as I would any site on the WAN.

Prism Central (PC) will be deployed onto the Nutanix Cluster after deployment. Prism Central contains the control plane for Flow Virtual Networking. The subnet for PC will be delegated to the Microsoft.BareMetal/AzureHostedService so native Azure networking can be used to distribute IPs for PC. Once PC is deployed, the Flow Gateway will be deployed into the same subnet PC is using. The Flow Gateway allows the User VMs using the Flow VPC(s) to communicate to native Azure services and allows the VMs to have parity with native Azure VMs, such as:

The Flow Gateway VM is responsible for all VM traffic going north and south bound from the cluster. During deployment you can pick different sizes for the Flow Gateway VM based on how much bandwidth you need. It’s important to realize that CVM replication between other CVMs and on-prem do not flow through the Flow Gateway VM so you don’t have to size for that traffic.

Network Address Translation (NAT): UVMs that want to communicate with AHV/CVM/PC and Azure resources will flow though the external Network card on the Flow Gateway VM. The NAT provided uses native Azure address to ensure routing to all resources. User defined routes in Azure can be used to talk directly to Azure resources if using a NAT is not preferred. This allows for fresh installs to communicate with Azure right away but also gives customers options for more advanced configurations.

The hosts running on baremetal in Azure are traditional AHV hosts, and thus leverage the same OVS based network stack.

The following shows a high-level overview of a Azure AHV host’s OVS stack: 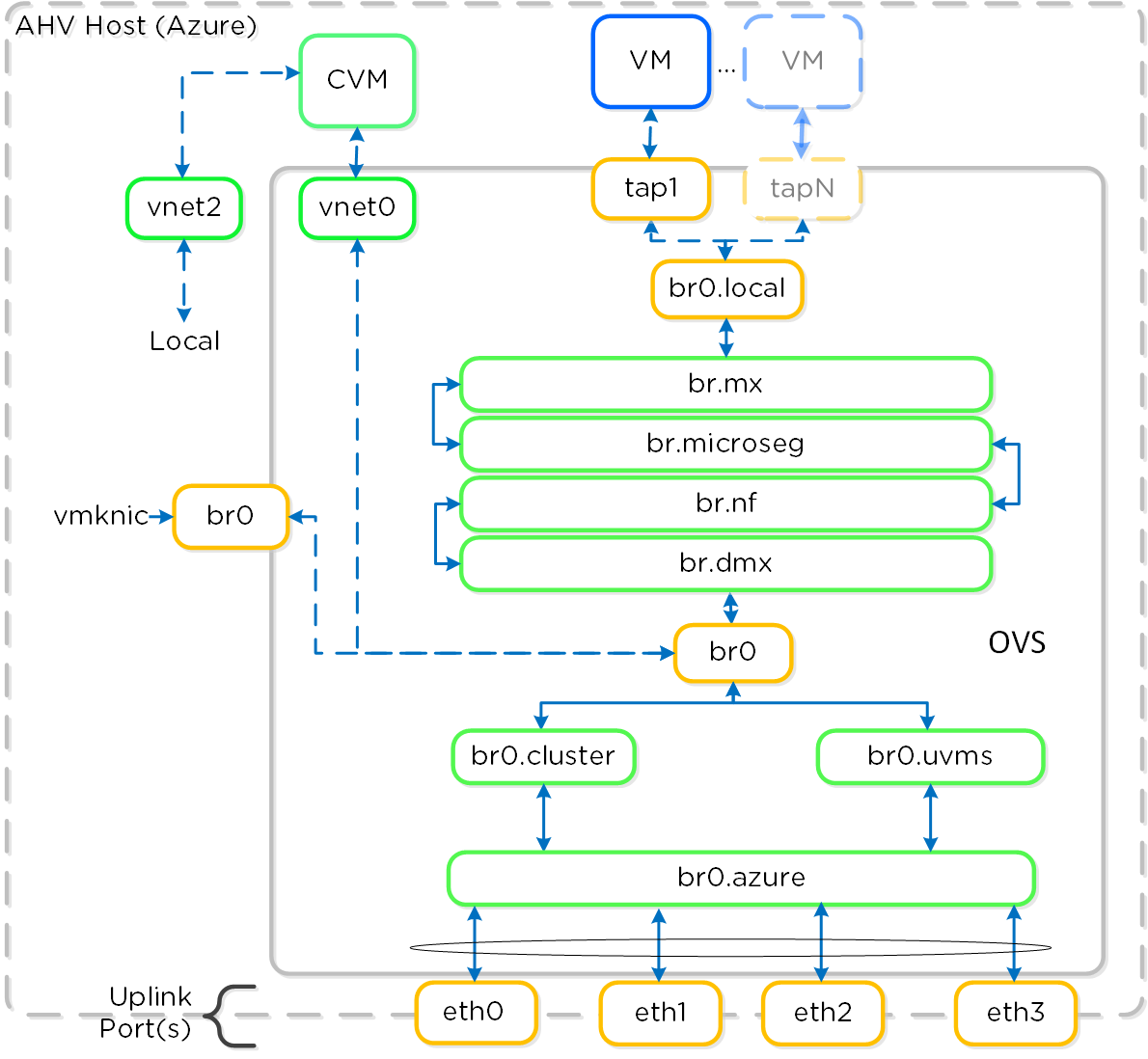 Nutanix’s Open vSwitch implementation is very similar to the on-premises implementation. The above diagrams shows an internal architecture of the AHV that is deployed onto the bare-metal. Br0 bridge will split traffic between br0.cluster (AHV/CVM IPs) and br0.uvms(User VMs IPs).

For AHV/CVM traffic via br0.cluster, it will be a simple pass-through to br0.azure bridge, with no modification to data packets. The top of rack switching is providing the security for br0.cluster traffic. For UVM IPs traffic will flow via br0.uvms, OVS rules would be installed for vlan-id translation and pass-through traffic to br0.azure.

Subnets you create will have its own built in IPAM and you will have the option to stretch your network from on-prem into Azure. If outside applications need to talk directly your UVM inside the subnet you also have the option to assign floating IPs from a pool of IPs from Azure that will come from the external network of the Flow Gateway. 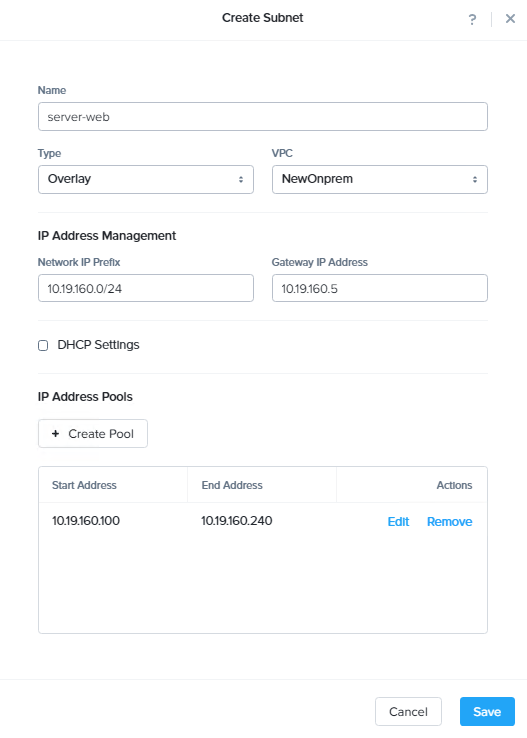 NC2 on Azure - IPAM with Azure

For a successful deployment, Nutanix Clusters needs outbound access to the NC2 portal, either using an NAT gateway or an on-prem VPN with outbound access. Your Nutanix cluster can sit in a private subnet that can only be accessed from your VPN, limiting exposure to your environment.

In most cases deployments will not be just in Azure and will need to communicate with the external world (Other VNets, Internet or WAN).

For connecting VNets (in the same or different regions), you can use VPC peering which allows you to tunnel between VPCs. NOTE: you will need to ensure you follow WAN IP scheme best practices and there are no CIDR range overlaps between VNets / subnets.

For network expansion to on-premises / WAN, either a VNet gateway (tunnel) or Express Route can be leveraged.

The following sections cover how to configure and leverage NC2 on Azure.

The high-level process can be characterized into the following high-level steps: