Nutanix Clusters on AWS provides on-demand clusters running in target cloud environments using bare metal resources. This allows for true on-demand capacity with the simplicity of the Nutanix platform you know. Once provisioned the cluster appears like any traditional AHV cluster, just running in a cloud providers datacenters.

The following key items are used throughout this section and defined in the following:

The provisioning process can be summarized with the following high-level steps:

The following shows a high-level overview of the Nutanix Clusters on AWS interaction: 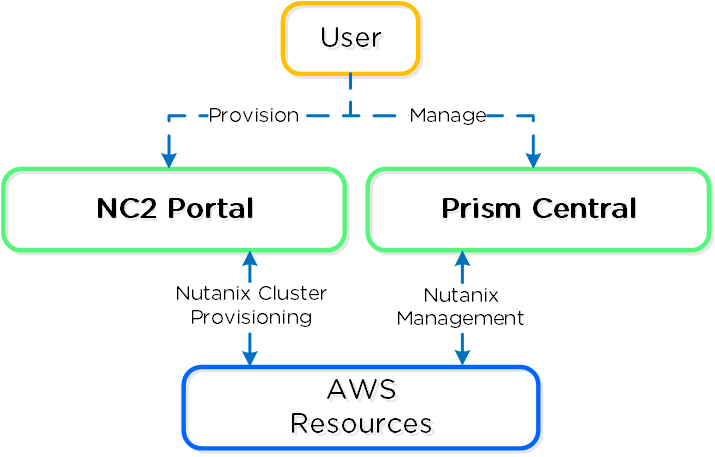 The following shows a high-level overview of a the inputs taken by the cluster orchestrator and some created resources:

The following shows a high-level overview of a node in AWS: 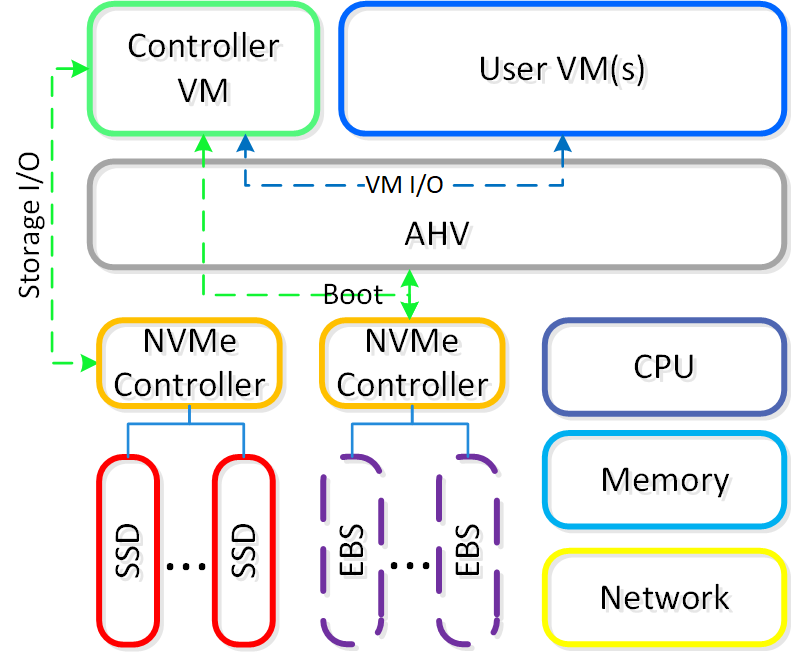 Given the hosts are bare metal, we have full control over storage and network resources similar to a typical on-premise deployment. For the CVM and AHV host boot, EBS volumes are used. NOTE: certain resources like EBS interaction run through the AWS Nitro card which appears as a NVMe controller in the AHV host.

Nutanix Clusters on AWS uses a partition placement policy with 7 partitions by default. Hosts are striped across these partitions which correspond with racks in Nutanix. This ensures you can have 1-2 full “rack” failures and still maintain availability.

The following shows a high-level overview of the partition placement strategy and host striping:

In cases where multiple node types are leveraged (e.g. i3.metal and m5d.metal, etc.), each node type has its own 7 partitions which nodes are striped across.

The following shows a high-level overview of the partition placement strategy and host striping when multiple instance types are used:

Storage for Nutanix Clusters on AWS can be broken down into two core areas:

Core storage is the exact same as you’d expect on any Nutanix cluster, passing the “local” storage devices to the CVM to be leveraged by Stargate.

Given that the "local" storage is backed by the AWS instance store, which isn't fully resilient in the event of a power outage / node failure additional considerations must be handled.

For example, in a local Nutanix cluster in the event of a power outage or node failure, the storage is persisted on the local devices and will come back when the node / power comes back online. In the case of the AWS instance store, this is not the case.

In most cases it is highly unlikely that a full AZ will lose power / go down, however for sensitive workloads it is recommended to:

Networking can be broken down into a few core areas:

Instead of running our own overlay network, we decided to run natively on AWS subnets, this allows VMs running on the platform to natively communicate with AWS services with zero performance degradation.

Nutanix Clusters on AWS are provisioned into an AWS VPC, the following shows a high-level overview of an AWS VPC: 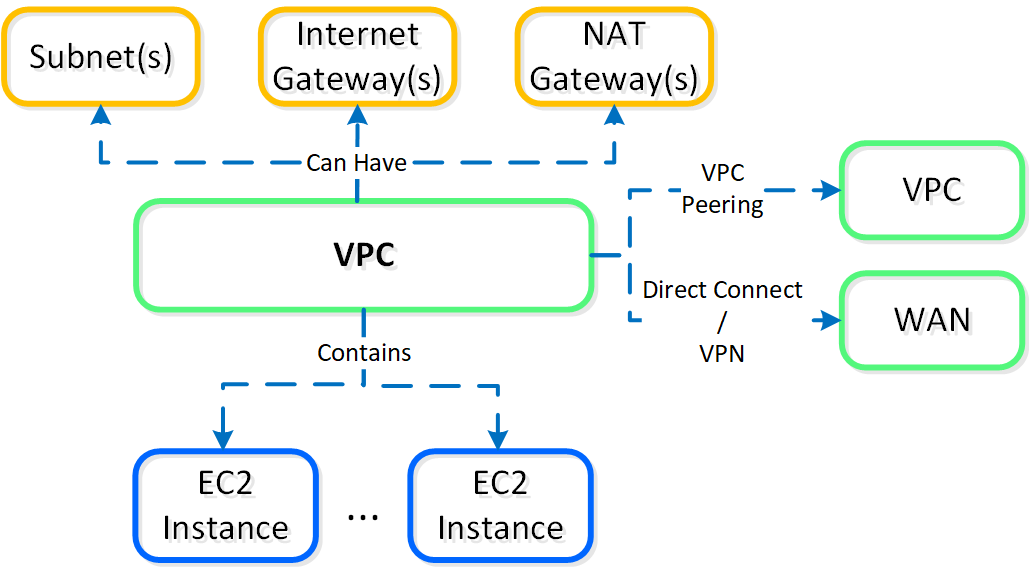 It is recommended to create a new VPC with associated subnets, NAT/Internet Gateways, etc. that fits into your corporate IP scheme. This is important if you ever plan to extend networks between VPCs (VPC peering), or to your existing WAN. I treat this as I would any site on the WAN.

The hosts running on baremetal in AWS are traditional AHV hosts, and thus leverage the same OVS based network stack.

The following shows a high-level overview of a AWS AHV host’s OVS stack: 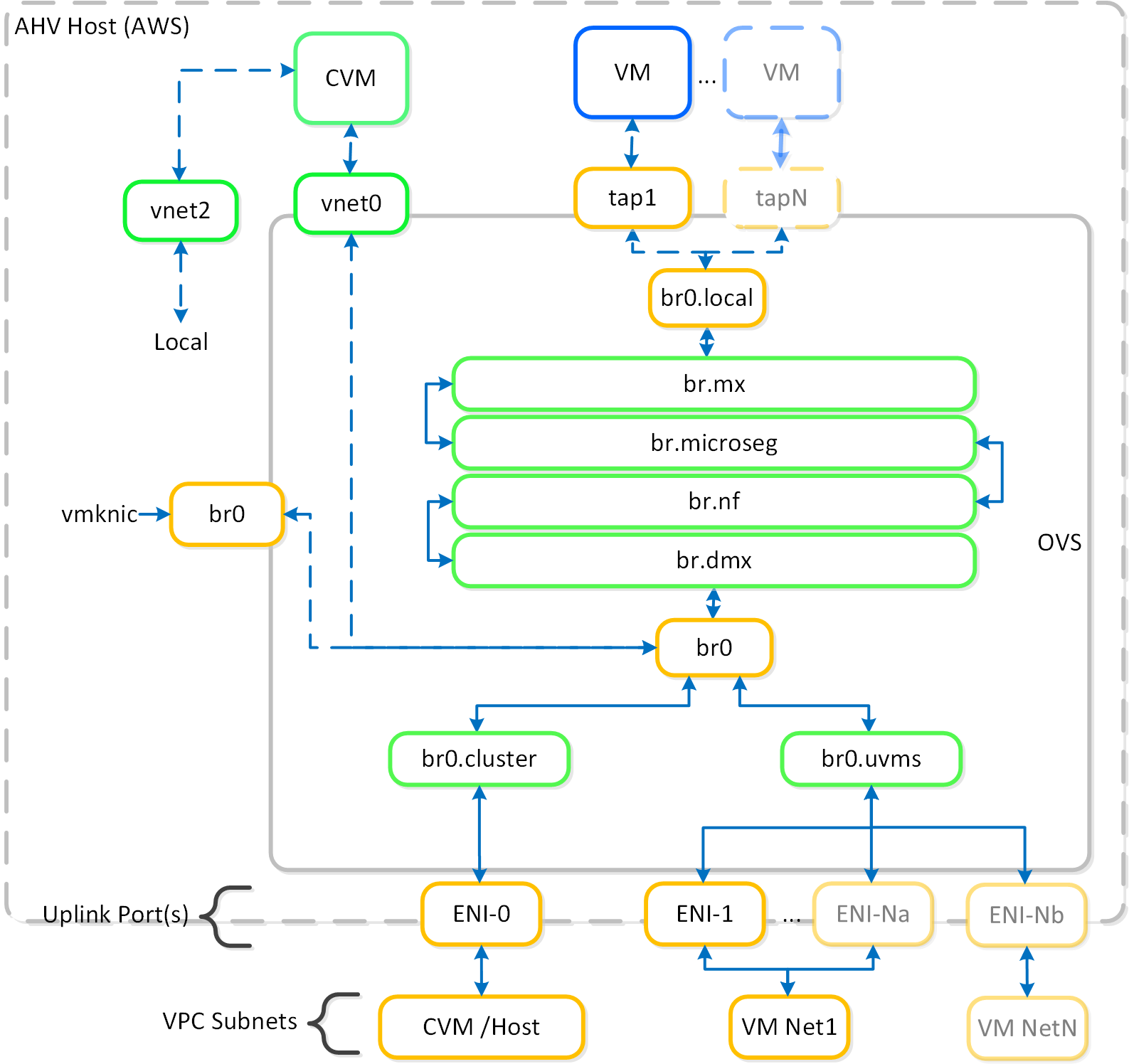 The OVS stack is relatively the same as any AHV host except for the addition of the L3 uplink bridge.

For UVM (Guest VM) networking, VPC subnets are used. A UVM network can be created during the cluster creation process or via the following steps:

From the AWS VPC dashboard, click on ‘subnets’ then click on ‘Create Subnet’ and input the network details: 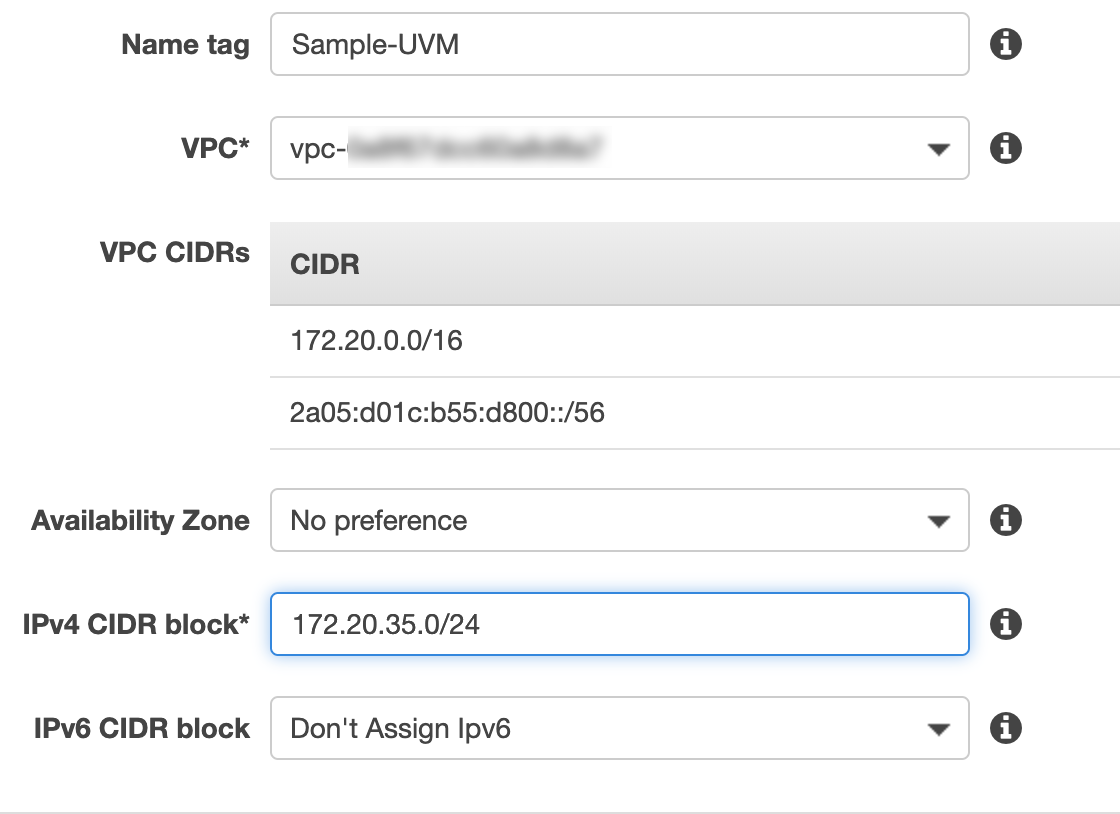 NOTE: the CIDR block should be a subset of the VPC CIDR range.

The subnet will inherit the route table from the VPC:

Once complete, you will see the network is available in Prism.

In most cases deployments will not be just in AWS and will need to communicate with the external world (Other VPCs, Internet or WAN).

For connecting VPCs (in the same or different regions), you can use VPC peering which allows you to tunnel between VPCs. NOTE: you will need to ensure you follow WAN IP scheme best practices and there are no CIDR range overlaps between VPCs / subnets.

The following shows a VPC peering connection between a VPC in the eu-west-1 and eu-west-2 regions:

The route table for each VPC will then route traffic going to the other VPC over the peering connection (this will need to exist on both sides if communication needs to be bi-directional):

For network expansion to on-premise / WAN, either a VPN gateway (tunnel) or AWS Direct Connect can be leveraged.

Given these resources are running in a cloud outside our full control security, data encryption and compliance is a very critical consideration.

The recommendations can be characterized with the following:

The following sections cover how to configure and leverage Nutanix Clusters on AWS.

The high-level process can be characterized into the following high-level steps: