The VPC or Virtual Private Cloud is the basic unit of Flow Virtual Networking. Each VPC is an isolated network namespace with a virtual router instance to connect all of the subnets inside the VPC. This is what allows the IP addresses inside of one VPC to overlap with any other VPC, or even with the physical network. A VPC can expand to include any cluster managed by the same Prism Central, but generally a VPC should exist only within a single AHV cluster, or within clusters in the same availability zone. More on that when we get to External Networks. 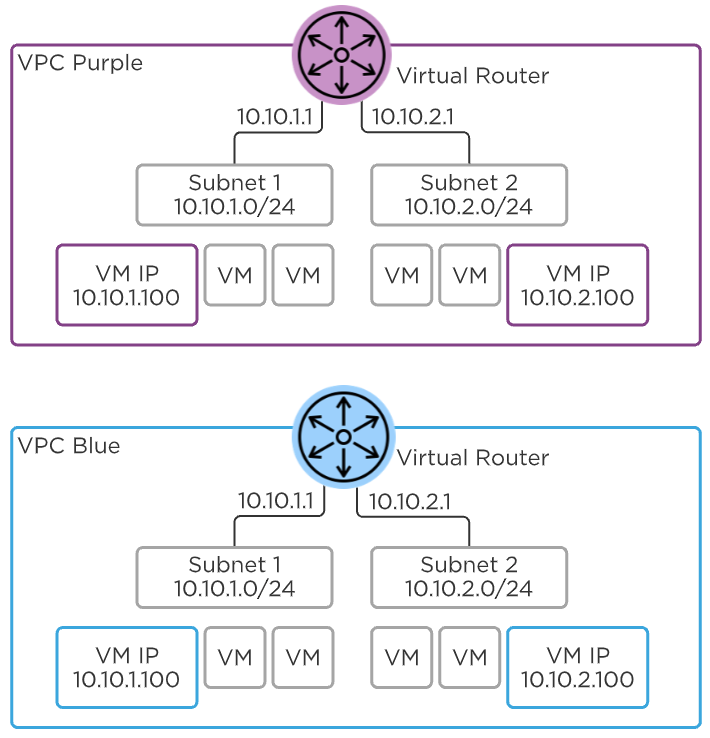 Each VPC can have one or more subnets and they’re all connected to the same VPC virtual router. Behind the scenes, a VPC leverages Geneve encapsulation to tunnel traffic between AHV hosts as needed. This means the subnets inside the VPC don’t need to be created or even present on the top-of-rack switches for VMs on different hosts to communicate. When two VMs in a VPC on two different hosts send traffic to each other, packets are encapsulated in Geneve on the first host and sent to the other host where they’re decapsulated and sent to the destination VM. 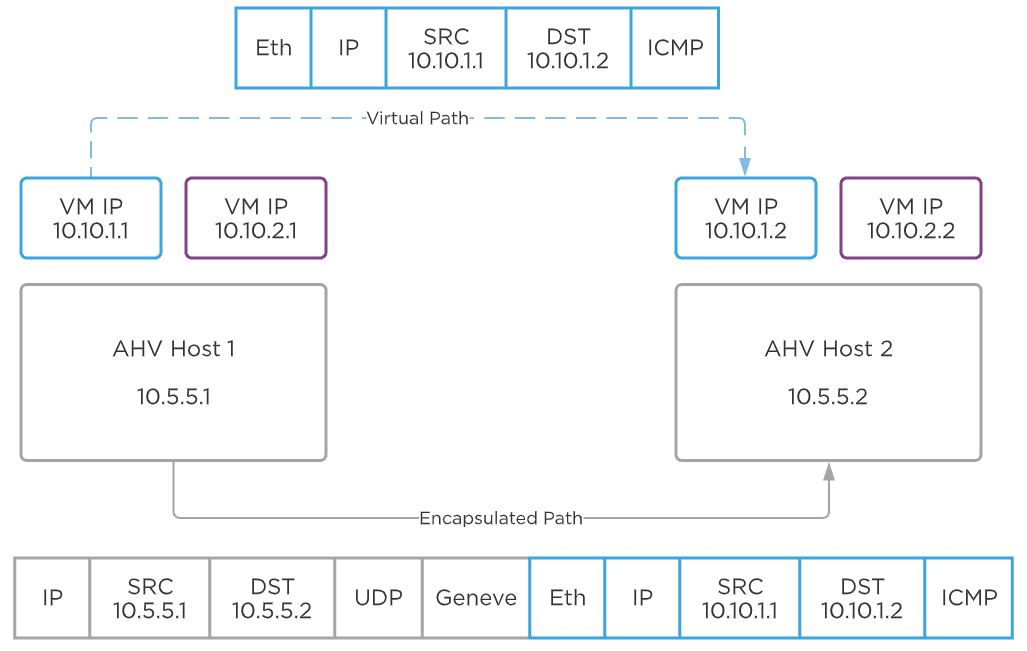 Every VPC contains a single virtual router and there are a few types of routes:

Directly connected routes are created for each subnet inside the VPC. Flow Virtual Networking assigns the first IP address of each subnet as the default gateway for that subnet. The default gateway and network prefix are determined by the subnet configuration and cannot be altered directly. Traffic between two VMs on the same host and same VPC, but in two different subnets, will be routed locally in that host.

Remote connections such as VPN connections and External Networks can be set as the next hop destination for a network prefix.

Each network prefix inside a VPC routing table must be unique. Don't program two different next hop destinations with the same destination prefix.

The virtual router acts as a control point for traffic inside a VPC. You can apply simple stateless policies here, and any traffic that flows through the router will be evaluated by the policies. Traffic from one VM to another inside the same subnet won’t go through a policy. 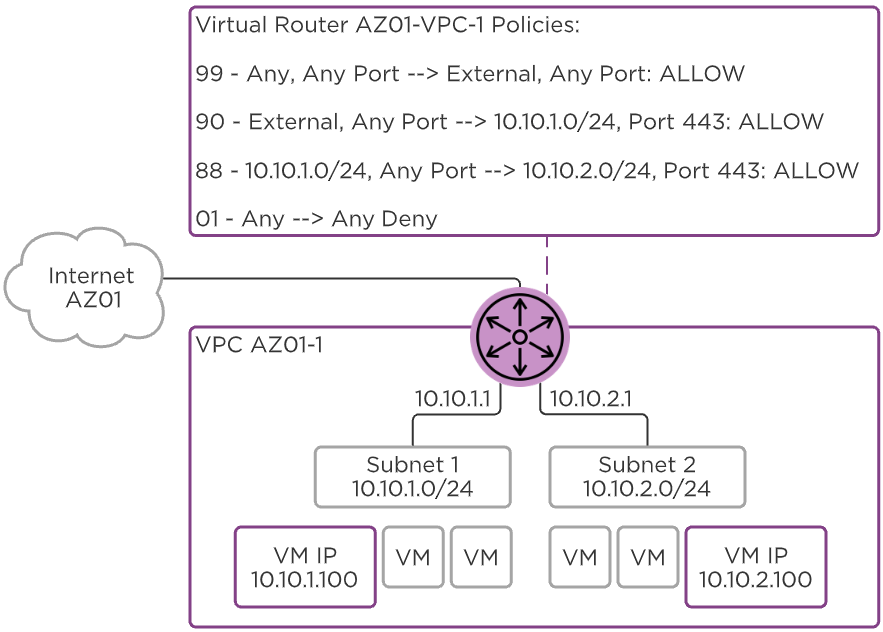 Inside a VPC, policies are evaluated in priority order from highest (1,000) to lowest (10).

You can match traffic based on the following values:

Once traffic is matched a policy can take the following actions:

The reroute policy is incredibly helpful to take action like routing all inbound traffic through a load balancer or firewall VM running inside another subnet in the VPC. This has the added value of requiring only a single Network Function VM (NFVM) for all traffic inside the VPC, rather than a traditional service chain that requires an NFVM per AHV host.

An External Network is the primary way traffic enters and exits a VPC. External Networks are created in Prism Central and exist on only a single Prism Element cluster. This network defines the VLAN, the default gateway, the IP address pool, and the NAT type for all the VPCs using it. One External Network can be used by many VPCs.

There are two types of External Networks:

A NAT (Network Address Translation) External Network hides the IP addresses of VMs in the VPC behind either a Floating IP or the VPC SNAT (Source NAT) address. Each VPC has an SNAT IP address selected randomly from the External Network IP pool, and traffic exiting the VPC is rewritten with this source address. 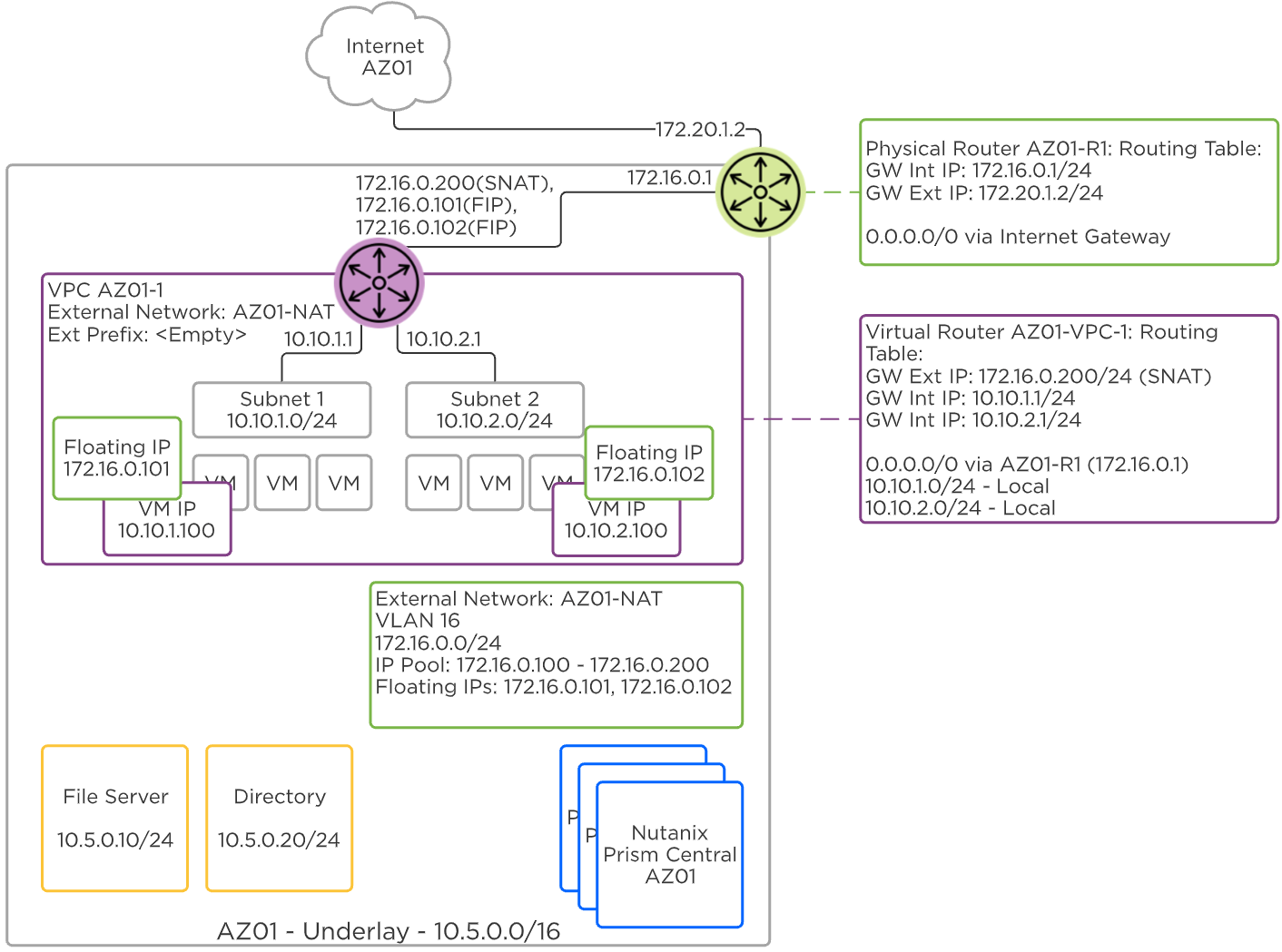 Floating IP addresses are also selected from the External Network IP pool and are assigned to VMs in a VPC to allow ingress traffic. When a Floating IP is assigned to a VM, the egress traffic is rewritten with the Floating IP instead of the VPC SNAT IP. This is useful for advertising public services outside the VPC without revealing the private IP address of the VM.

Routed, or NoNAT External Networks allow the IP address space of the physical network to be shared inside the VPC through routing. Instead of a VPC SNAT IP address, the VPC router IP is selected randomly from the External Network pool. Share this VPC router IP with the physical network team so they can set this virtual router IP as the next hop for all of the subnets provisioned inside the VPC.

A Network Gateway acts as a connector between subnets. These subnets can be of many different types and in different locations.

The Network Gateway has several methods of connecting subnets. 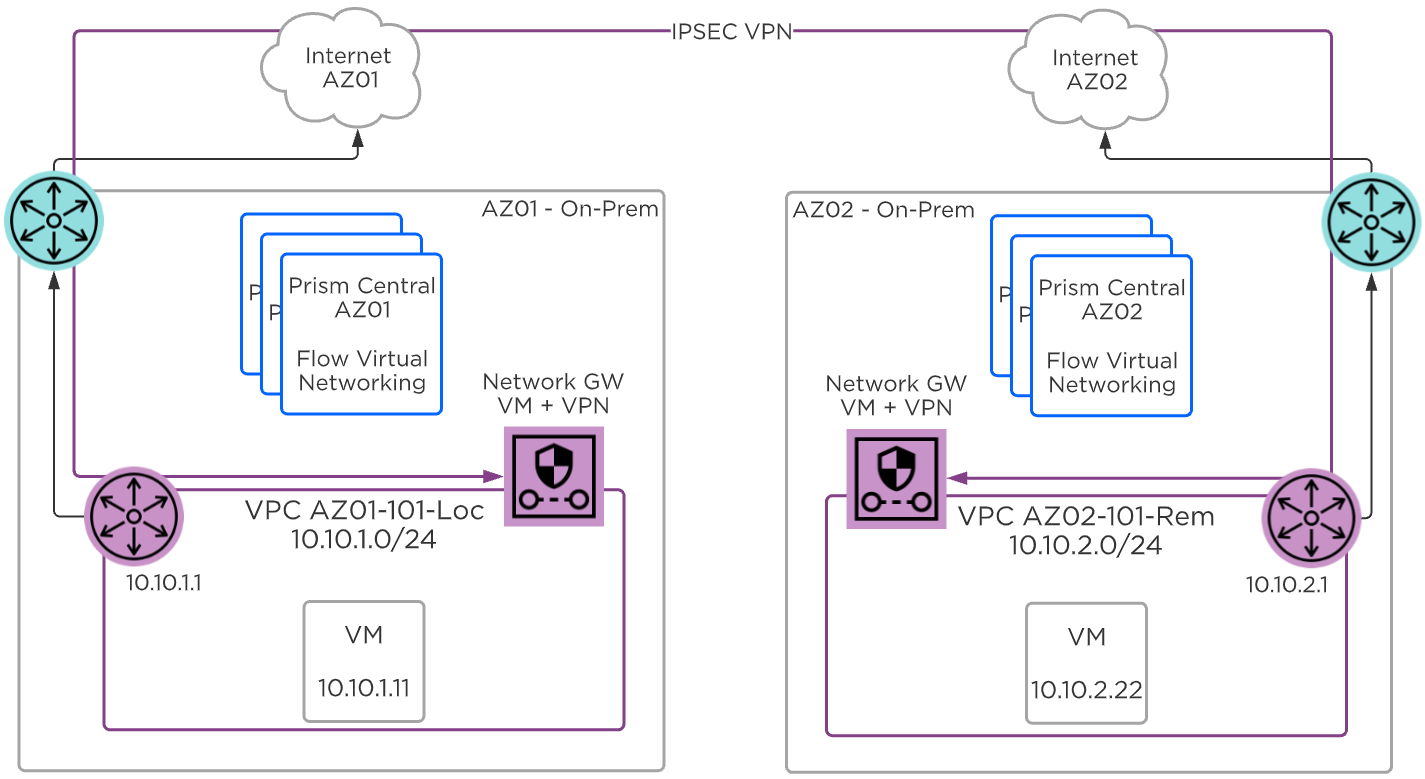 When using two Network Gateways, each Network Gateway is assigned an external IP address from the DHCP pool, and they must be able to communicate over these addresses.

Traffic from each subnet to the remote subnet is directed over the created VPN connection using IP routing inside the VPC. Routes can be either static or shared between Network Gateways using BGP. Traffic inside this VPN tunnel is encrypted with IPSEC.

Use VPN with IPSEC encryption when traffic between subnets will go over a public link such as the Internet. 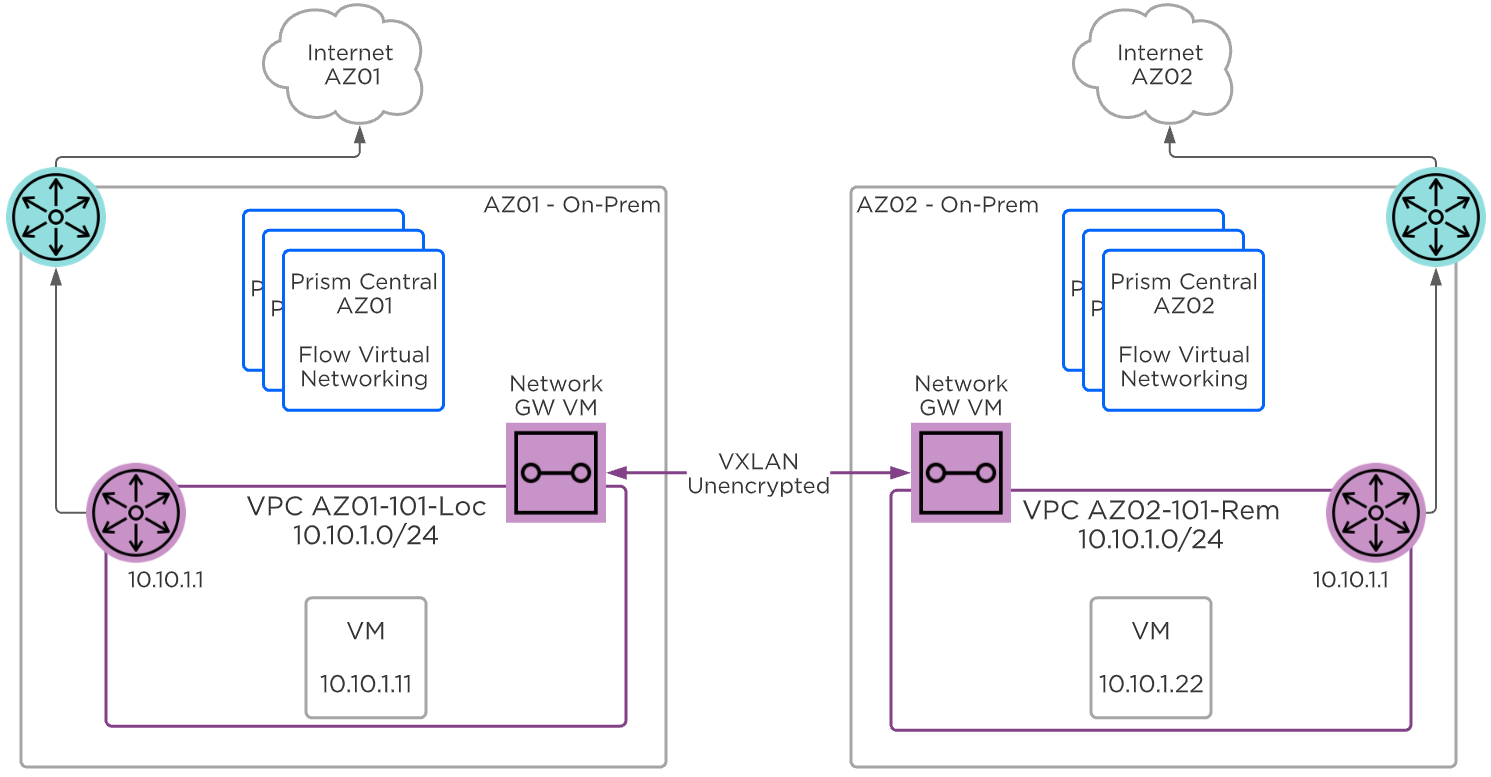 Use VXLAN VTEP only when traffic is traversing private or secured links, because this traffic is not encrypted. 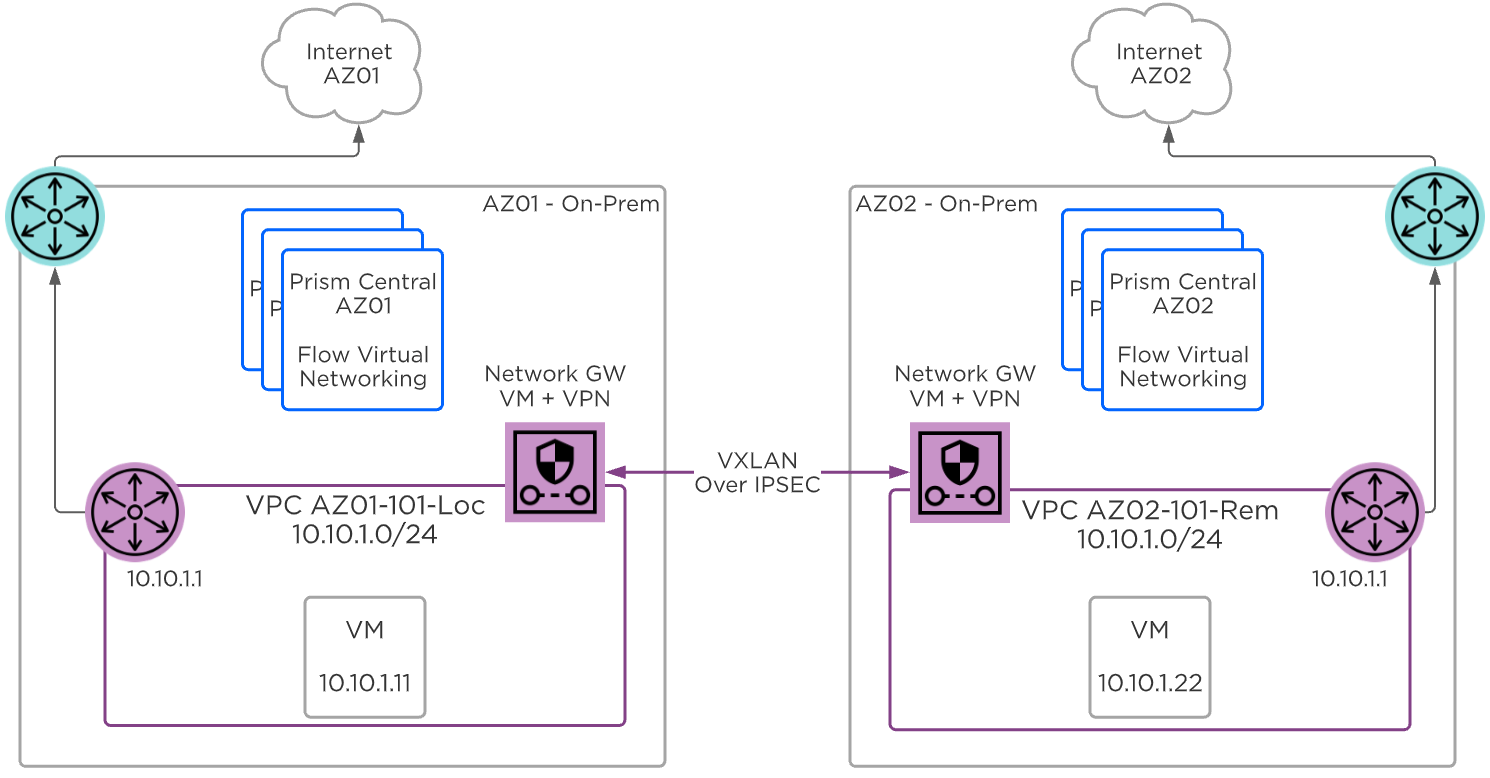