The solution is composed of the NGT installer which is installed on the VMs and the Guest Tools Framework which is used for coordination between the agent and Nutanix platform.

This framework is composed of a few high-level components:

The figure shows the high-level mapping of the components:

The Guest Tools Service is composed of two main roles:

You can find the IP of the CVM hosting the NGT Leader role with the following command (run on any CVM):

The figure shows the high-level mapping of the roles: 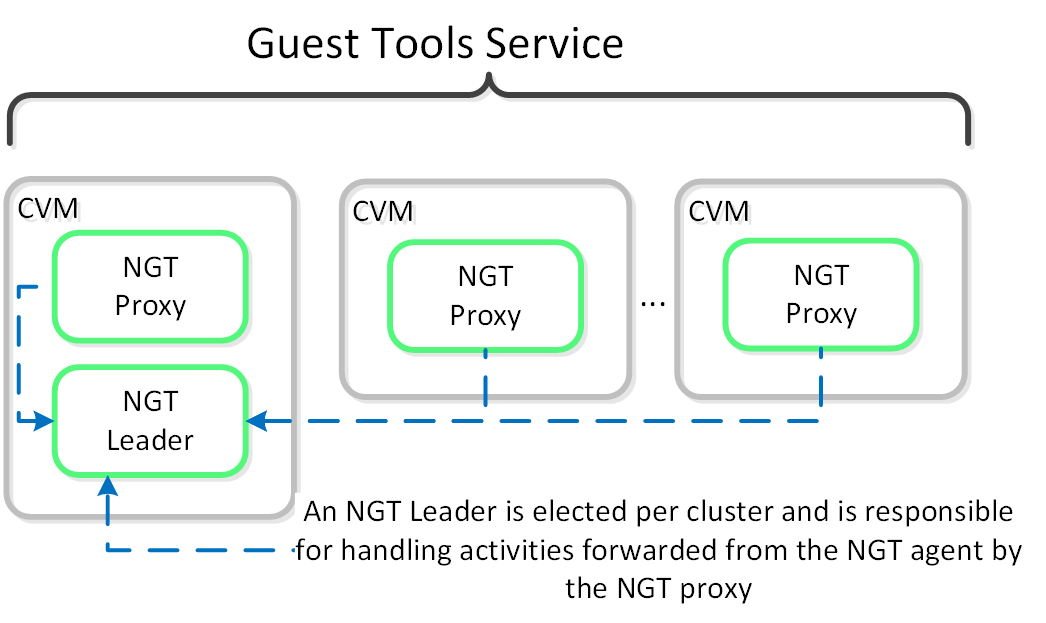 The Guest Agent is composed of the following high-level components as mentioned prior:

The Guest Agent Service communicates with Guest Tools Service via the Nutanix Cluster IP using SSL. For deployments where the Nutanix cluster components and UVMs are on a different network (hopefully all), ensure that the following are possible:

The Guest Tools Service acts as a Certificate Authority (CA) and is responsible for generating certificate pairs for each NGT enabled UVM. This certificate is embedded into the ISO which is configured for the UVM and used as part of the NGT deployment process. These certificates are installed inside the UVM as part of the installation process.

NGT Agent installation can be performed via Prism or CLI/Scripts (ncli/REST/PowerShell). 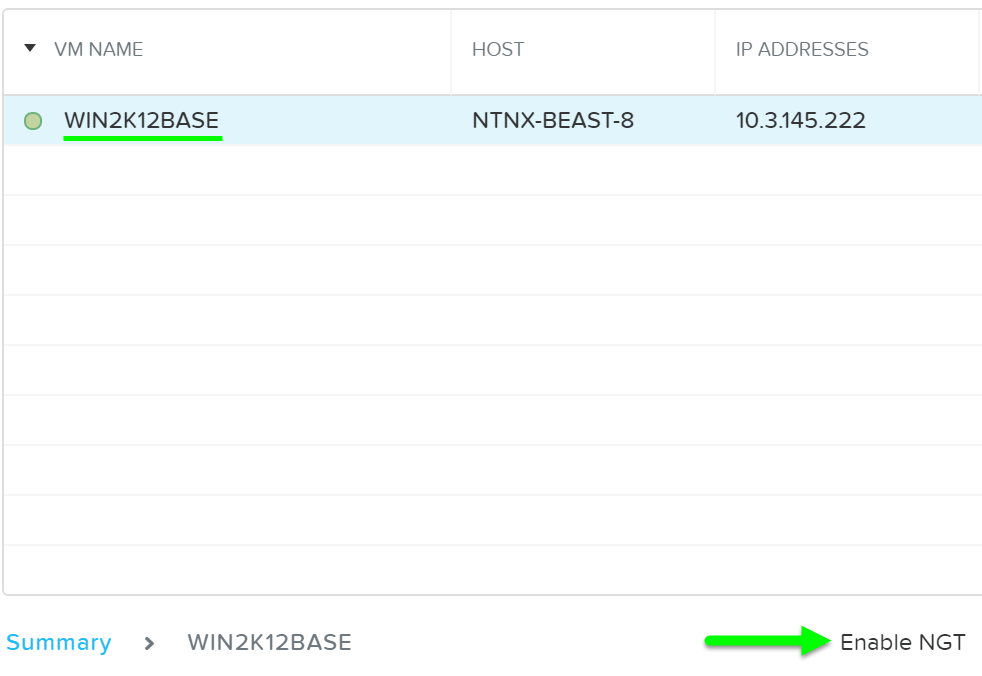 Click ‘Yes’ at the prompt to continue with NGT installation:

The VM must have a CD-ROM as the generated installer containing the software and unique certificate will be mounted there as shown:

The NGT installer CD-ROM will be visible in the OS:

Double click on the CD to begin the installation process.

You can perform a silent installation of the Nutanix Guest Tools by running the following command (from CD-ROM location):

Follow the prompts and accept the licenses to complete the installation: 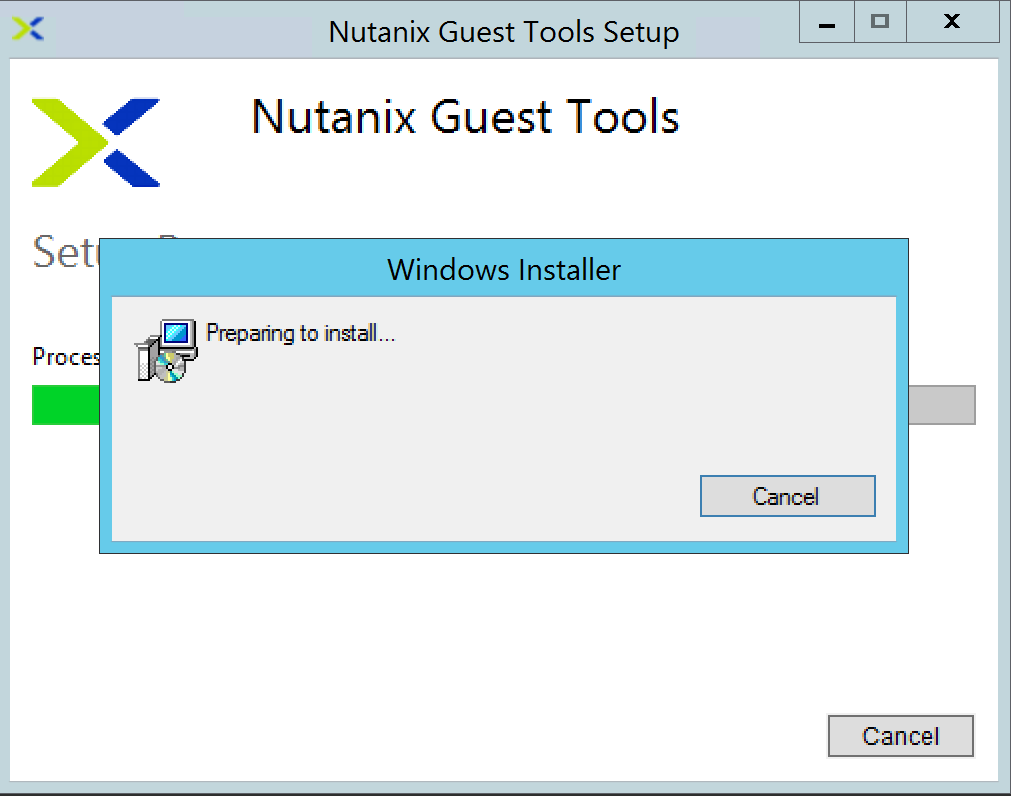 As part of the installation process Python, PyWin and the Nutanix Mobility (cross-hypervisor compatibility) drivers will also be installed.

After the installation has been completed, a reboot will be required.

After successful installation and reboot, you will see the following items visible in ‘Programs and Features’:

Services for the NGT Agent and VSS Hardware Provider will also be running:

NGT is now installed and can be leveraged.

Rather than installing NGT on each individual VM, it is possible to embed and deploy NGT in your base image.

Follow the following process to leverage NGT inside a base image:

When the cloned VM is booted it will detect the new NGT ISO and copy relevant configuration files and new certificates and will start communicating with the Guest Tools Service.

Some typical uses include:

The solution is applicable to Linux guests running on AHV, including versions below (list may be incomplete, refer to documentation for a fully supported list):

In order for CloudInit to be used the following are necessary:

Sysprep is available by default in Windows installations.

CloudInit can be installed (if not already) using the following commands:

Sysprep is part of the base Windows installation.

To leverage a custom script for OS customization, a check box and inputs is available in Prism or the REST API. This option is specified during the VM creation or cloning process: 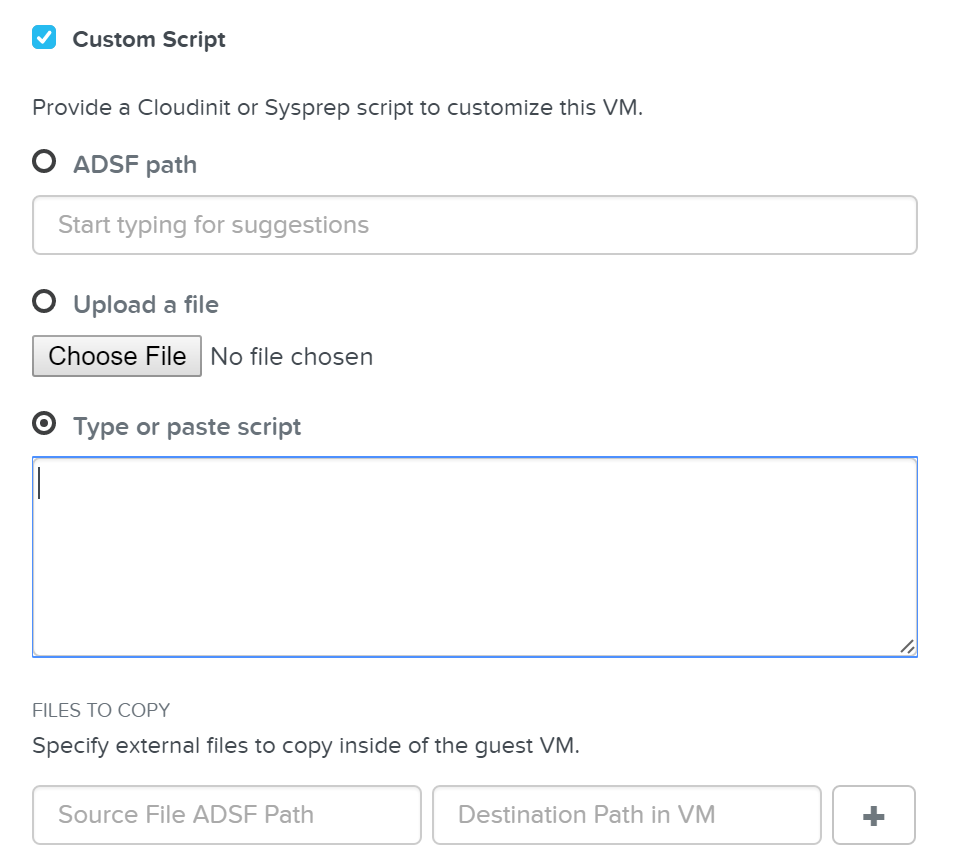 Nutanix has a few options for specifying the custom script path:

Nutanix passes the user data script to CloudInit or Sysprep process during first boot by creating a CD-ROM which contains the script. Once the process is complete we will remove the CD-ROM.

The platform supports a good amount of user data input formats. Some of the key formats are outlined below:

A user-data script is a simple shell script that will be executed very late in the boot process (e.g. “rc.local-like”).

The scripts will begin similar to any bash script: “#!”.

Below we show an example user-data script:

The include file contains a list of urls (one per line). Each of the URLs will be read and they will be processed similar to any other script.

The scripts will begin with: “#include”.

Below we show an example include script:

The cloud-config input type is the most common and specific to CloudInit.

The scripts will begin with: “#cloud-config”

Below we show an example cloud config data script:

The unattend.xml file is the input file Sysprep uses for image customization on boot, you can read more here: LINK

Attached is an example unattend.xml file

Nutanix provides the ability to leverage persistent containers on the Nutanix platform using Kubernetes (currently). It was previously possible to run Docker on Nutanix platform; however, data persistence was an issue given the ephemeral nature of containers.

Container technologies like Docker are a different approach to hardware virtualization. With traditional virtualization each VM has its own Operating System (OS) but they share the underlying hardware. Containers, which include the application and all its dependencies, run as isolated processes that share the underlying Operating System (OS) kernel.

The following table shows a simple comparison between VMs and Containers:

*As of 4.7, the solution only supports storage integration with Docker based containers. However, any other container system can run as a VM on the Nutanix platform.

The following entities compose Docker (note: not all are required):

The Nutanix solution currently leverages Docker Engine running in VMs which are created using Docker Machine. These machines can run in conjunction with normal VMs on the platform. 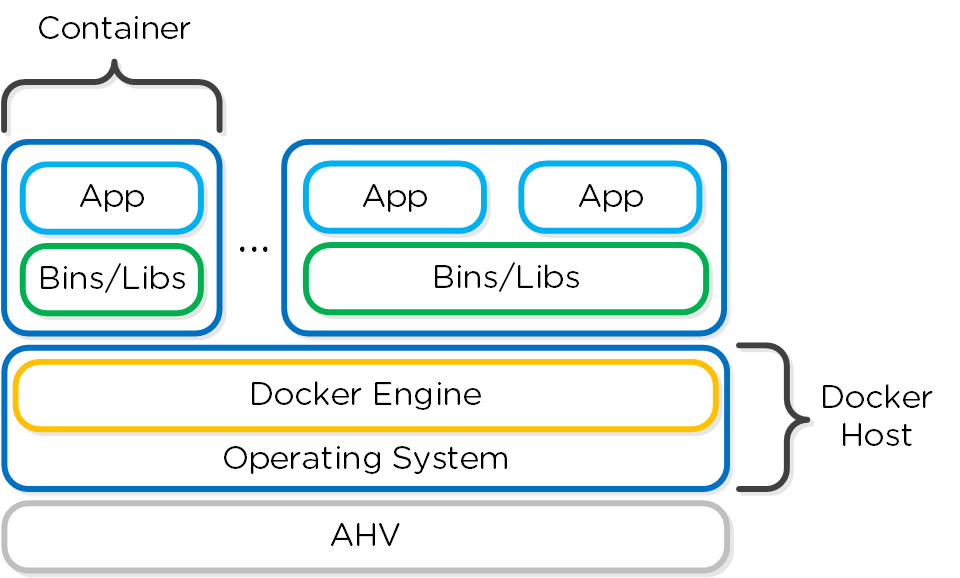 Nutanix has developed a Docker Volume Plugin which will create, format and attach a volume to container(s) using the AOS Volumes feature. This allows the data to persist as a container is power cycled / moved.

Data persistence is achieved by using the Nutanix Volume Plugin which will leverage AOS Volumes to attach a volume to the host / container: 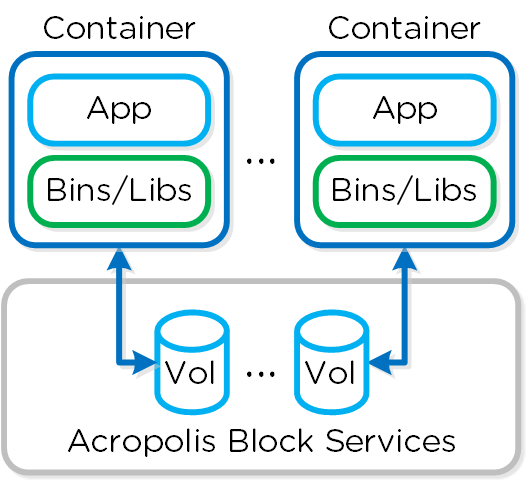 In order for Container Services to be used the following are necessary:

Assuming all pre-requisites have been met the first step is to provision the Nutanix Docker Hosts using Docker Machine:

The following figure shows a high-level overview of the backend workflow:

The next step is to SSH into the newly provisioned Docker Host(s) via docker-machine ssh:

After that runs you should now see the plugin enabled:

Once the Nutanix Docker Host(s) have been deployed and the volume plugin has been enabled, you can provision containers with persistent storage.

A volume using the AOS Volumes can be created using the typical Docker volume command structure and specifying the Nutanix volume driver. Example usage below:

The following command structure can be used to create a container using the created volume. Example usage below:

The following figure shows a high-level overview of the backend workflow:

You now have a container running with persistent storage!